3rd class were learning the pencil roll and the egg roll recently. They practised the shapes first before trying the roll on a mat! 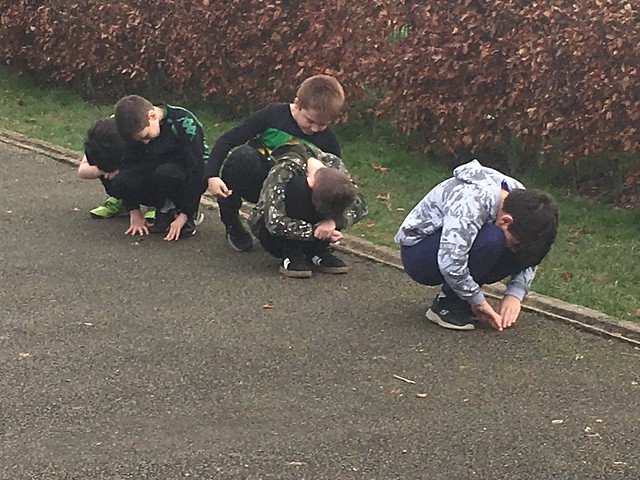 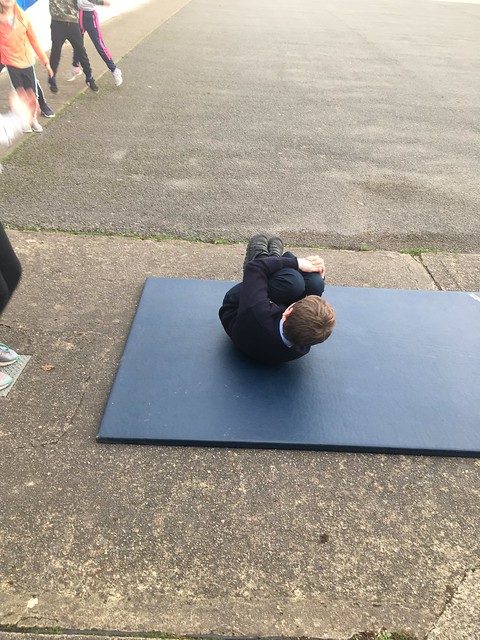 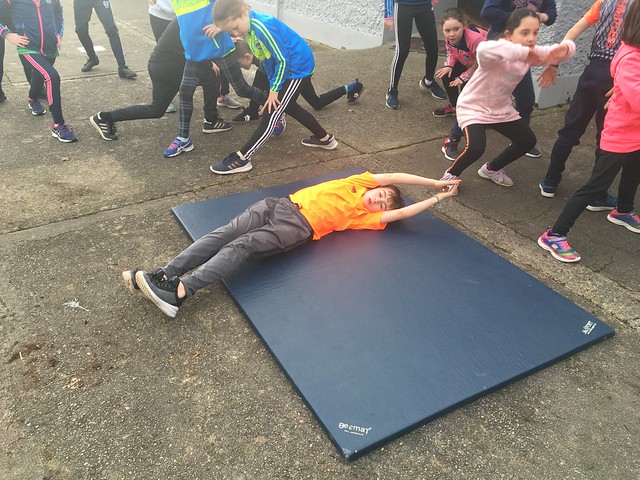 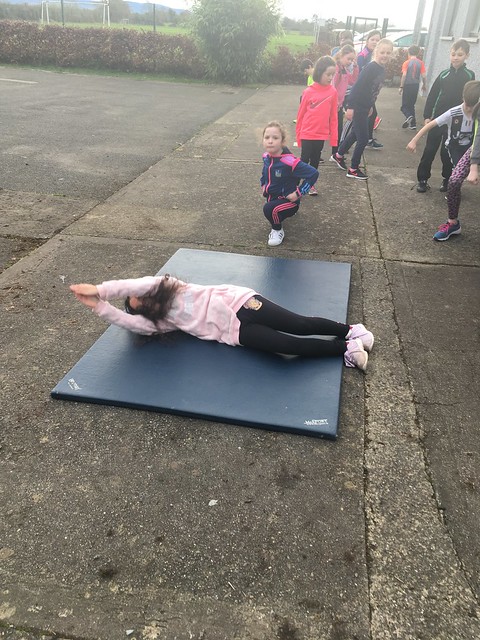 3rd class had a great opportunity recently when CB Media visited the classroom to record a video about their eTwinning Christmas card project. It was a great experience for the children to see the cameraman in action as well as learning how to look into the camera when speaking. Click here to see the video.

6th Class Narrative Writing: Based On Historical Events : Jim Larkin and the 1913 Lockout

I was havin’ a puck with Mick when our fathers came out and said, ‘that we had to come inside now’. When I asked why, he said that Big Jim Larkin was having a meeting outside the GPO and that we were to stay put until it was over. The GPO was only one street away and the crowds were already spilling onto the streets. So, when our fathers left ,it wasn’t very hard to slip away and follow them,each of us wondering what was going to happen.

There were thousands of people turned up but as far as I could see we were the only children present.

Jim was the most confident man that I had ever come across.He talked with such ease and enthusiasm that I could have listened to him forever.

Everybody was drawn in by his elegant posture and clothes and he wasn’t a scrawny man either. He moved as if he could hold his own in a fist-fight and I believe he could too.

When Jim had finished his speech, he pointed at us and said,’Look at these young lads here. They have come out here with such curiosity,         enthusiasm and daring’.

Much to our surprise, he called us up and shook our hands. Then he told us to run home as fast as we could. It's a  good thing we did too because as soon as we turned the corner we could hear the beefeaters closing on the scene.

When I shook Jim’s hand, his black leather glove came off.I looked up at him and he winked.Written on the inside were the initials ‘J.L.’ I’ve often told the story of the meeting but nobody believes me until I produce the black glove. I still have to this day.

What Club are you In?

The children in 5th and 6th Class, in groups, asked all the children in the school which club they are in. They kept tally of the data and displayed their resutls on a bar graph chart. The children are involved in many different clubs in the locality. 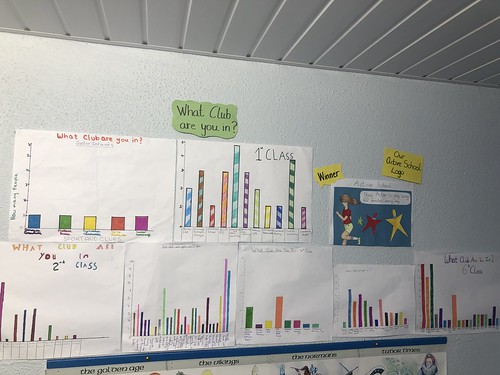 As part of their daily Aistear time these children created an underwater scene and used imaginative and language play throughout. 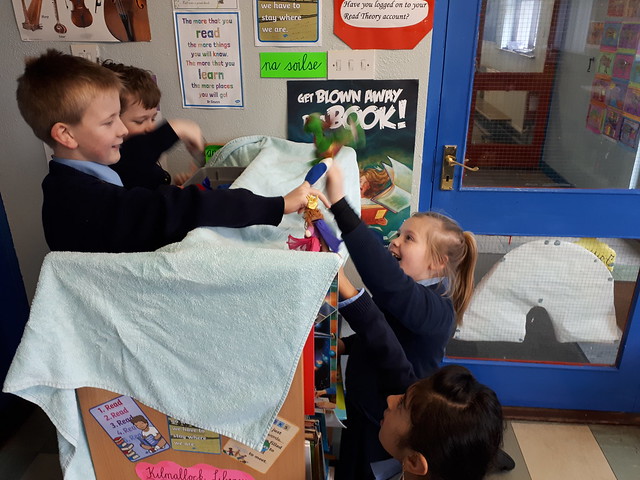 Pupils in second class enjoyed making the toy shop part of their Aistear time this week as well as doing transactions during maths lessons. 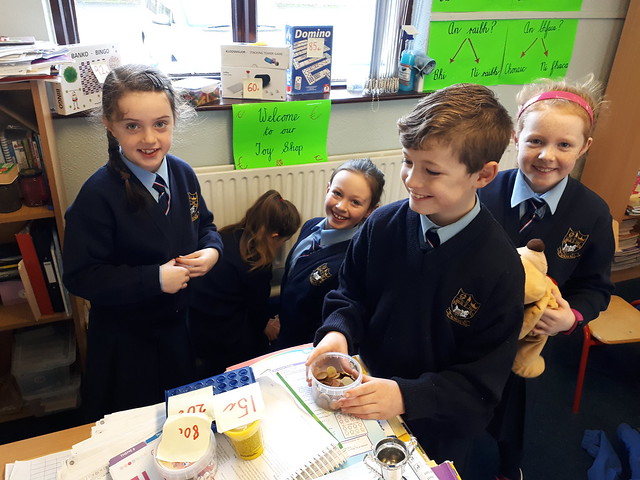 Pupils in first and second class commenced their eight weeks of swimming lessons at the Charleville Park Hotel in mid-January. 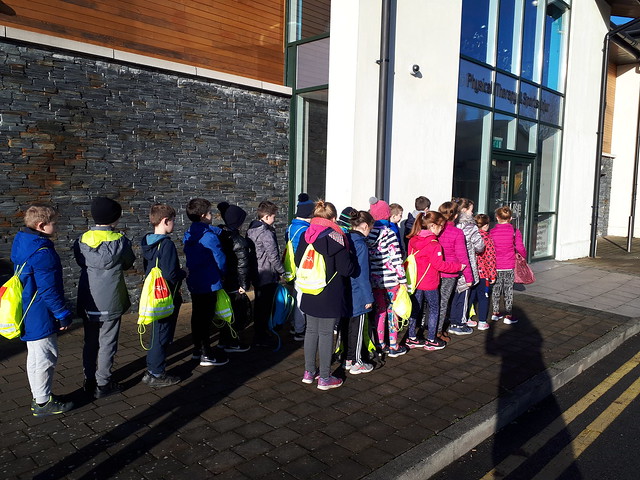 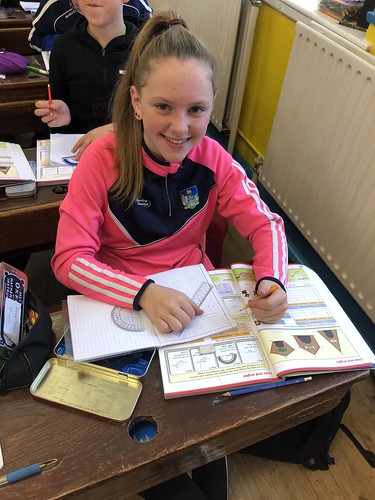 6th Class really enjoyed LEGO Robotix. This LEGO Education based workshop covered all of the Science, Technology, Engineering and Maths (STEM) subject. The children had the opportunity to become engineers, researchers, analysts, designers and more.

One group was picked, by the expert trainers, to compete with 30 other schools in Limerick, in the Robotix final in March. 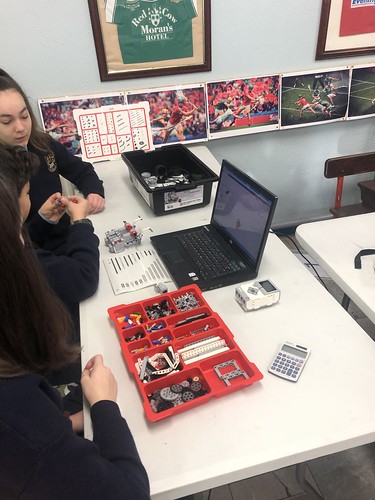